At last a macOS update I can get on board with

I’ve used “the Mac OS” for longer than I care to admit but through many, many incarnations over the years. In the early days, you would look forward to the releases/updates of new major versions because they would bring major innovation. But over at least the last 5 major versions, I’ve updated but experienced very little in the way of new functionality that has been of any real use or interest. In most cases, it usually just becomes more irritating to use. I don’t begrudge Apple making changes for e.g., security purposes, but I couldn’t tell you one new feature over the last 10 years that has genuinely changed the way I work or made me step back and notice.

Well, the great news is that macOS Monterey - and specifically 15.4 - has brought a whole swathe of stuff that is genuinely cool and will change things. There are plenty of reviews out there, so I really just wanted to highlight two big ones.

This is huge. And it took me completely by surprise. Universal Control is the Airplay / network / wifi-based ability to have effectively a virtual KVM across a bunch of devices. As I was setting up my new Mac, with my old one alongside it, I literally did a double-take as my mouse just drifted seamlessly off my new Mac and on the screen of the old one.

I had absolutely no idea it was a thing and it literally did just work. It can be found in the Displays panel of system preferences: 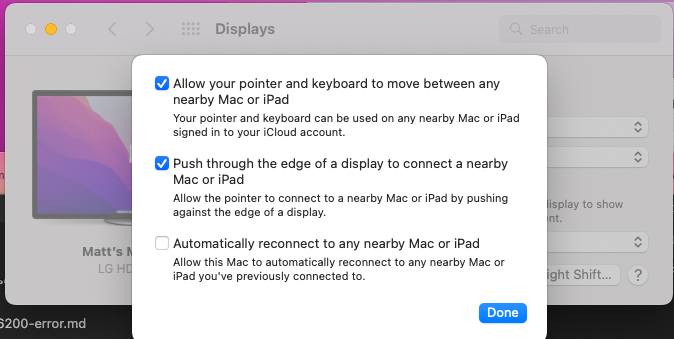 Universal Control is also used to control external displays - which means you can now use compatible iMacs as external displays (like the old Target Display Mode which has long since been discontinued) but also moreorless any other Apple device that is sharing your Apple ID - so yes, Macbooks, iPads, iPhones… not tried Apple Watch yet… that’s probably a step too far.

This is seriously slick and does just work. There are one or two inconvenient things though.

Other than that though, it’s awesome.

One niche but very issue I’ve had in macOS - esp. when compared to Windows. I take a LOT of screenshots, and I often like to simply highlight (with a virtual highlight pen) an area of the image. The snipping tool does this really nicely on Windows. But if you use the macOS keyboard shortcuts to take screenshots, the default editor is really limited in what you can do. In fact I find the edit tools in Preview to be infuriating to use - no simple pen, it has to be a self-straightening line and all sorts. And I don’t want to be opening a full editor just to highlight something on the image.

The bizarrest thing is that the editor on iOS has exactly what I need - various pens/highlighters to quickly markup the image. WHY CAN’T I HAVE THESE ON MACOS FFS?!

Well, step up Continuity Editor. This is ridiculously convoluted, but now, when you take a macOS screenshot, if you open the thumbnail (bottom right), you can use the usual editing tools, but now have the option to send this to your iDevice! And this works really well too.

You make the edits on your phone / iPad and these are instantly reflected on the screenshot on your macOS. Wicked. I really hope they bring this same function to Preview so that you can do it in anything (or, you know, just give us some proper basic editing tools by default in macOS.)

Anyway, these things are awesome and genuine enhancements. And apparently, coming next to the Universal Control family (in Ventura) is the ability to use your iDevice as a webcam for macOS. Brilliant.

PS. Check out all the things you can do with macOS screenshots that you probably didn’t realise: The Complete Guide to Taking Screenshots and Screen Recordings on Mac, iPhone, iPad, and Apple Watch.