Everything wrong with 'boutique hotels'

“Jolyon’s at No.10” in Cardiff is everything that’s wrong with ‘boutique hotels’.

There, I’ve said it. Apologies if this sounds like a splenetic, unwarranted rant… and, honestly, it’s not aimed directly at Jolyon’s… the stay itself was fine (other than a few issues as noted later) and the staff were good and attentive. This is aimed more generally at the concept of a boutique hotel, but it just so happens that it was my stay at Jolyon’s that prompted this. Perhaps if they didn’t advertise as being boutique, I wouldn’t be referencing them. But they do, so here we are.

And no, that image above is not Jolyon’s. If it was, we wouldn’t be here.

Fair point. If the hotel is nice and you have a good stay, then what does it matter? Not a jot, I daresay, except that by liberally slapping ‘boutique’ in your hotel description seems to mean you can then inflate your prices to match.

So if you’re paying over the odds for a ‘boutique’ hotel compared with a ‘normal’ or even ‘budget’ hotel, shouldn’t you expect something a bit extra in return?

What even is a boutique hotel? Even wikipedia doesn’t really know. About the best it has is this:

“Many boutique hotels are furnished in a themed, stylish and/or aspirational manner.”

Not much. One should assume therefore that it derives mostly from the conceptual French definition of boutique - i.e. not literally a small shop but the fact that it endeavours to be unique, different or highly niche in some way.

I can understand this as a concept and why some hotels will aspire to provide a unique or different experience. Clearly a Premier Inn isn’t boutique. But what makes a hotel boutique? Merely being a bit modern and a bit funky does not. Can you actually ‘create’ boutique - or is it somehow inherent? A boutique hotel is not simply a hotel that has spent too much money at Farrow & Ball and a local flea market and in trying to craft something boutique, you end up missing the marque and end up with this.

Given the lack of a quality, well-established definition of what a boutique hotel is, then I’m well prepared to accept that it’s different for everyone; and my interpretation of what it is may be totally out of kilter with what others think. If that’s the case, then may I offer my thanks for stopping by, but you’d probably best move on now. Nothing to see here.

But it’s my blog, so if you’re still here, please continue at your leisure. Thanks.

A few years ago I stayed at The Rubens at the Palace in Central London. They also call themselves a boutique hotel. And for them, I totally get it. The building has heritage; the furnishings are authentic. It was chock full of period features that clearly came from the period rather than being shoehorned in as part of trying to achieve the effect. It felt they were trying hard to be something a bit different; but the difference being was it felt like natural, unforced effort.

Unlike Jolyon’s, which felt like someone had tried to develop a boutique hotel out of thin air.

Signs it’s not all the boutique

So here follows my top indicators that your boutique hotel isn’t really all that boutique.

I’m not just making this up:

Someone’s cut the tile wrongly, most likely realised they’ve done it wrong, but then just thought ‘ah sod it’ and carried on, instead of doing it again, properly. I could have done a better job than that, and my tiling is shocking. And let’s not even begin to wonder what happens when moisture now inevitably gets in behind there. 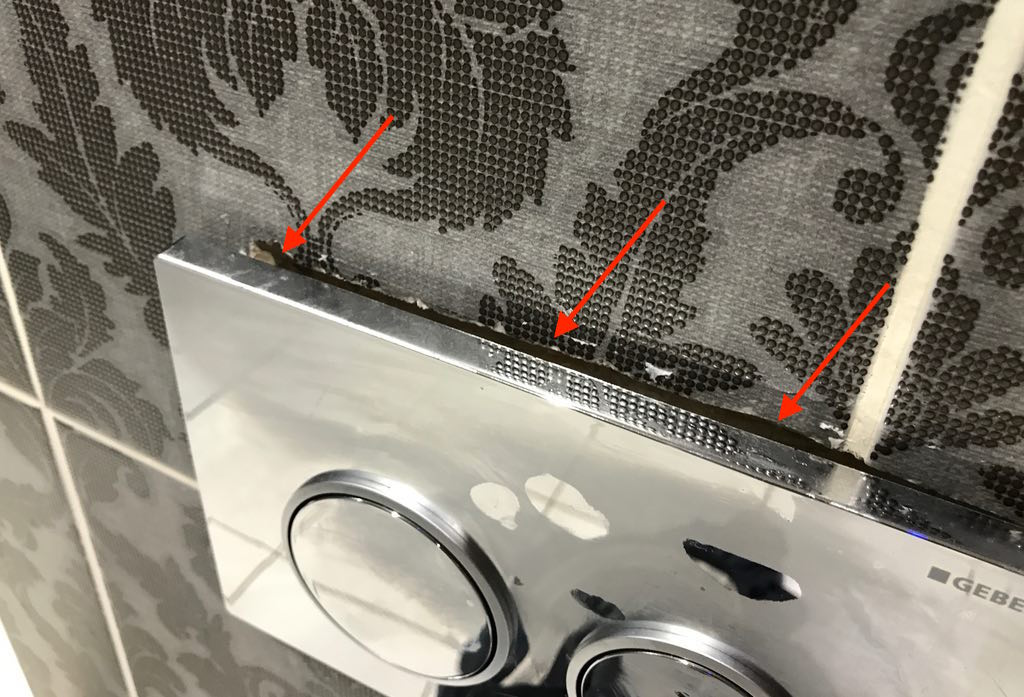 The controls are not even vaguely flush nor affixed to the toilet cabinet. Had I wanted, I could have wedged my finger in to that gap and pulled it right out.

It had these fold-y bathroom doors which were sort of on the way to achieving a nice niche feature (try saying that quickly). I’ve not seen them before, so yep, that might tick a boutique box, if done properly. But the handle is in the wrong place (based on the geometry of the folding mechanism) so as to make them thoroughly awkward to use, but, moreover, the doors don’t actually close flush with the door jambs. So if I need to attend to something in the bathroom, I can’t actually shut the doors properly, which means anyone else in the room gets a nice experience themselves. #facepalm

I could go on… but by now I hope I’ve made my point so I shall end it there.

If you’re actually just a nice, modern hotel, that’s OK! But just be that. Don’t be boutique. Just be nice.

Because at just shy of £300 for a two night stay, I expected a lot more than we got from Jolyon’s and I left feeling hard done by and annoyed enough to write this, which, I’m guessing isn’t really the sort of experience Jolyon’s at No.10 (gah) really wanted.

Endnote… on the actual stay at Jolyon’s

We did have a perfectly ‘fine’ stay there. Still smarting from the cost of it, I’ll admit, but hey, it kept the rain off. But there were a few issues:

We did raise some of those issues with the hotel so hopefully they’ll get sorted, but, probably needless to say, if I do find myself in Cardiff again, I will most likely be looking for somewhere else to stay.

PS. If I’ve referenced Jolson’s instead of Jolyon’s then please accept my apologies. Autocorrect is driving me nuts. I think I’ve got them all but a few of the blighters could have slipped through.
PPS. Sorry again to Cardiff Cathedral. You really are a beautiful cathedral, I didn’t mean any offence.