This post has been in draft for some time and to be honest it’s been long enough now that I don’t know exactly what I had planned to write.

SO WHY WRITE IT? I hear you mumble. Well, that’s a good question, but it’s not how my OCD allows me to operate. There was a reason.

So for now, though, until my memory sorts itself out, I’ll just explore the topic a little, and maybe update it again in the future.

The vast majority of home internet and Wifi solutions are solved by whatever box your ISP gives you. It’s usually pretty shit, but just about OK enough to manage a feeble dribble of internet access to the people who need it.

In my case, that’s not good enough. I run a SoHo style network at home which means I use a variety of gear that needs to be better than your average ISP issued box of poo. I’ve got switches, NAS, Raspberry Pis, network-attached printers, multiple computers, etc.

That’s a long-winded way of saying I use slightly less consumer-focused computer gear than most. And to that end I have been a long-time user of Draytek modems. They are enterprise-grade, British-made routing products. I’ve used a mixture of these from ADSL, through to VDSL as well as 4G-enabled variants and you can typically choose whether they have Wifi on-board or not. I’ve experimented with both, but around 5 years ago I adopted the Netgear Orbi mesh system when it was released. This meant the Draytek became only the router, DHCP server and so on, with the Orbi dishing out only the wireless component of the network. 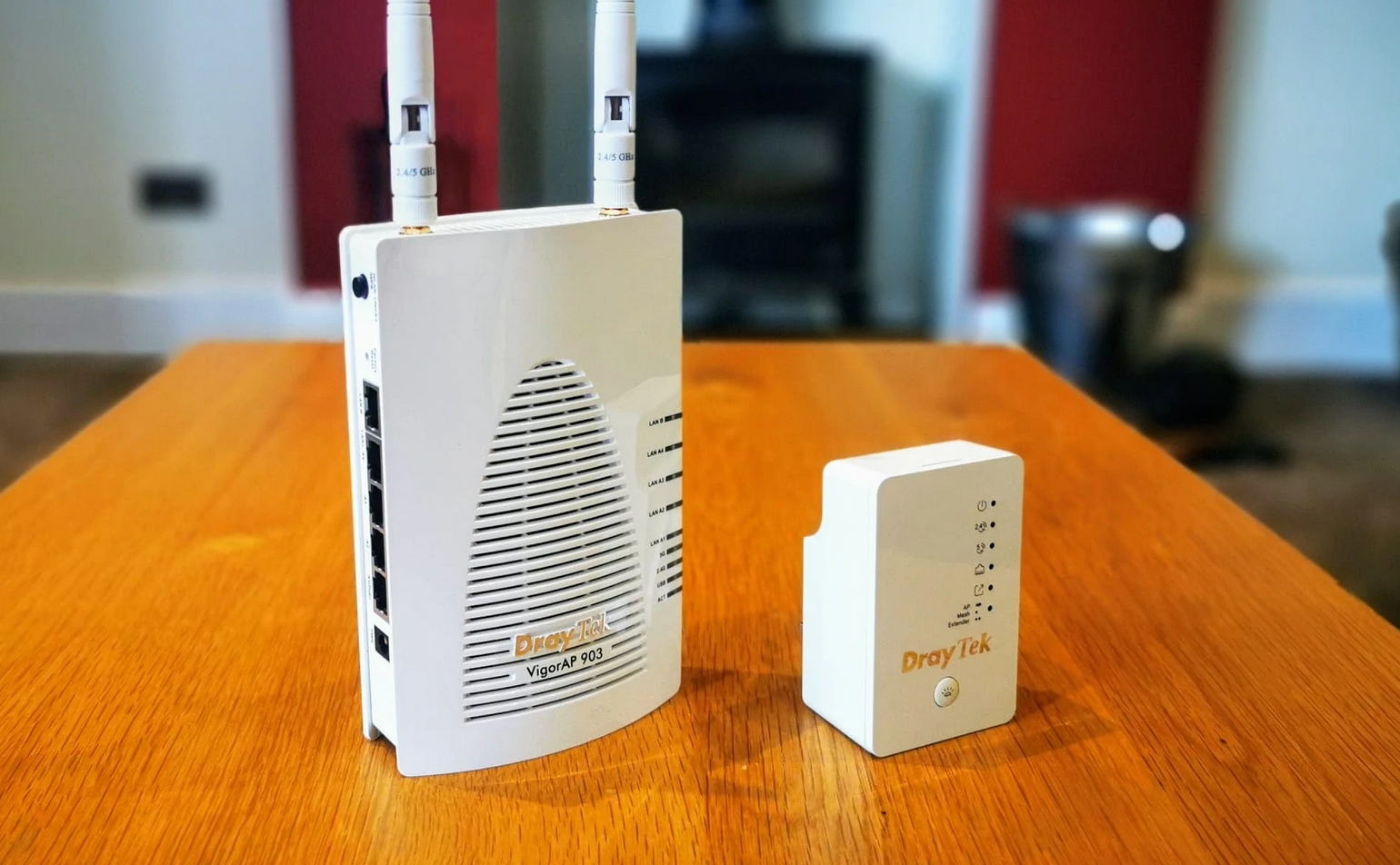 All was fine, but then Draytek started manufacturing their own mesh wifi hardware and when that was released, it seemed a no-brainer to replace the Orbi with it. I bought a bunch of nodes, flogged the Orbi and…. was immediately disappointed. The Draytek stuff is not cheap and immediately

From what was a 2-node Orbi system, to the Draytek with multiple nodes (up to 6 at one point), the coverage was hands-down worse 1. I spent months tinkering and tweaking - Draytek gives you all the necessary weaponry to shoot yourself repeatedly and comprehensively in the foot (and face. I spent time with Draytek support trying to nail down the right blend of settings to try and get it working more consistently. I tried a variety of other things; shifting to pure AP mode, using dedicated backhaul, using powerline plugs to enable wired backhaul, using more nodes, using fewer nodes. Some or all of which may or may not have made a difference because if you spend long enough doing this after a while you lose track.

And so eventually it did seem to settle down a bit :happy: But it turns out this might be because I had given up caring quite as much. The family were moaning less, I knew roughly where the good spots were and I had become accustomed to if stuff buffered or slowed down - to disable and re-enable the wifi, which would probably force you to reconnect to the closer access point.

I was in the lounge one day with the laptop; something that I hadn’t been doing for a while as I had got in to the habit of working off my main computer which was attached via ethernet. All of a sudden I became very aware of exactly how poor the wifi connection was. By now, the TV was hardwired on a powerline socket so streaming / smart features weren’t an issue, but then I spotted that downloading a few mb of data on the Nintendo Switch was taking literally hours. If you moved closer to the root node, things improved. However, even when stood next to one of the nodes, the performance was still considerably degraded compared to being on ethernet.

It was time to do something about it. 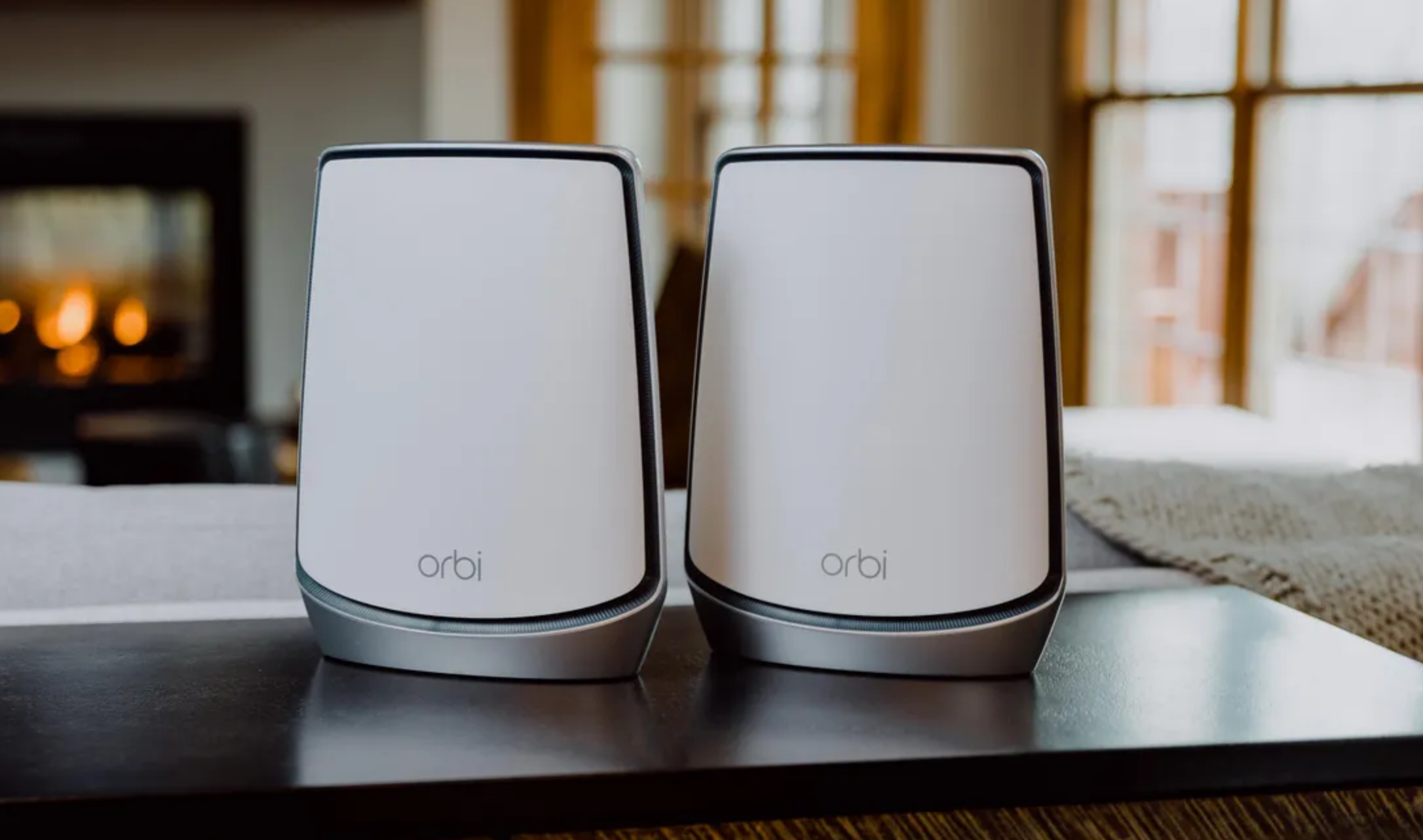 And with Black Friday approaching that seemed like the time. Although I have heard many good things about the Google nest system, I immediately ruled it out because, you know… Google. Amazon’s eero was discounted for much the same reason, although that was more because I do not want any sort of Alexa style device in the house and it seemed impossible to get an eero without it. I considered the Deco stuff from TP-Link but the specs just seemed a bit behind the times.

My abysmal memory convinced me that the Orbi had always been quite good and so that seemed like a safe bet to go back to it. I managed to pick up a 3-node Wifi6-enabled Orbi device for a decent discount. Make no mistake, it was still by no means cheap -far from it- but, and here’s the kicker, it took around 10minutes to install and things were instantly better. The main test - internet speed on Wifi - was immediately there or thereabouts with only a small overhead for being on wifi. You could roam about the house now and never lose connection or speed. I could sprawl in the lounge and get near as anything full speed internet.

Problem solved! Well, no, actually, but stay tuned for that.

So what was wrong?

But I am happy to accept that it was equal measures of user error (me) and Draytek gear not working well in complex home environments.

On the latter, I don’t know enough about the specifics of the hardware but it seemed fundamentally that the radios in the Wifi nodes - or the software controlling them - was super-sensitive to any form of interference, which in simplest terms is walls (and microwaves, home phones, vacuum cleaners, children, pictures and mirrors etc…) Draytek gear is designed to work in office spaces, where there is considerably less interference and you are less constrained with where you are able to put devices.

On the former issue, I’ve no doubt that a big part of this issue is me. I added a lot of nodes to the network (assuming more is better) and I’m not convinced this is the case. One big part of the issue I believe is that devices didn’t tend to roam between nodes very well; or in other words, they remained connected to distant nodes for longer than they probably should. AP-roaming is handled by the software but there are a variety of settings that talks about min strength of signals and so on. In fact, as noted previously Draytek gives you every opportunity to tweak virtually anything you can think of - and this is one good reason for using their devices - but it’s that sort of control just isn’t really required in a consumer / domestic / home scenario.

In other words, whether the hardware in the Orbi is superior to the Draytek or not, what it does do is shield the average dickhead like me from all the nobs and switches that can get you in trouble. It handles the setup, running and maintenance fairly well for you. You can Next, Next, Finish the install and, in my experience at least, it just took care of things.

So that’s a big yay for Netgear then?

Erm, no, not really.

The main challenge was to get more reliable and near full-speed internet in the home, and the Orbi has achieved this.

But I have had to sacrifice a lot of functionality. Despite some of the issues with the Draytek, you could nevertheless achieve some pretty sophisticated things… multiple LANS with VLANS mean isolating an e.g., internet only (no network) guest wifi is simple. You can do dedicated routing. Even setting up a single cross-environment DNS server is reasonably simple.

With the Orbi, I had multiple issues:

A big irritation I have is that I largely went with this Orbi because it was Wifi6. Black Friday also yielded an Amazon Fire stick on offer - and that was Wifi6 - and I figured this would be a good starting point to transition over.

But no. The Orbi Wifi6 implementation is flawed. In order to use Wifi6 you must use WPA3 for authentication. However, the Orbi does not provide a mixed-mode WPA3/WPA2 environment. Therefore the whole network would need to be WPA3, which would rule out quite a large number of devices.

All told, I have to run the Orbi in “dumb” mode aka AP mode - and the consquence of this is that all the smart bollocks that you pay extra for are automatically disabled. There is no reasonable technological reason for them to be disabled - it’s just what Netgear have decided to do.

The Orbi system is providing me with reliable and fast Wifi albeit at the expense of some advanced networking tools and so for now at least I’m happy enough - it has made the problem go away - but in hindsight the Orbi is not the instant no-brainer I thought it was.

I would still love to one day get the Draytek mesh gear working better but having already invested months in to this, that seems incredibly unlikely, espcially as I’ve already spent hours speaking with support over the issues. I even tried to antagonise both Draytek and Netgear on Twitter in a sort of playground-style “fight! fight! fight!” but they (rightly)… ignored me.

As it happens, we are in the process of pushing out in to the garden (with an office building) where some form of connectivity will be required. I guess the real test of this will be how well I am able to connect that up.

But if (… when) I have to do this all over again, I would probably consider one of the other enterprise alternatives - perhaps the Ubiquiti or the Cisco Meraki kit…? Not sure.