And now for something completely different.

Long story short, I bought the mixed pack of Samyang Korean ramen noodles from Amazon and I’m planning to document my experience of trying them.

I like spicy food. I am a solid vindaloo in the curry house; but will always try hotter (or milder) as may be available. My tastes have definitely mellowed as I’ve got older and nowadays I definitely prefer things slightly milder than my younger years, but I will still not shy away from a challenge - and my ‘mild’ is still considerably hotter than others I know.THis isn’t some macho flex; it’s just the way it is; I like hot food.

I have only very rarely - perhaps only once or twice - had something so hot I couldn’t eat. One was a packet of ‘psycho’ peanuts - I forget the exact brand, possibly these, but you could literally only have one or two single peanuts in one sitting.

The other was a pack of ramen noodles; it was so unbelievably hot as to be unpleasant; and possibly is the only time hot food has been abandoned.

I was randomly on Amazon and stumbled across the ‘2x spicy Samyang spicy ramen’. I can’t remember if these are the ones that I had the time before but (a) I was inclined to find out but also (b) was certainly more wary this time around.

So rather than buying a bumper pack of potentially very spicy ramen I couldn’t eat, I wanted an alternative; and then I found the mixed pack and thought this was all a good idea. 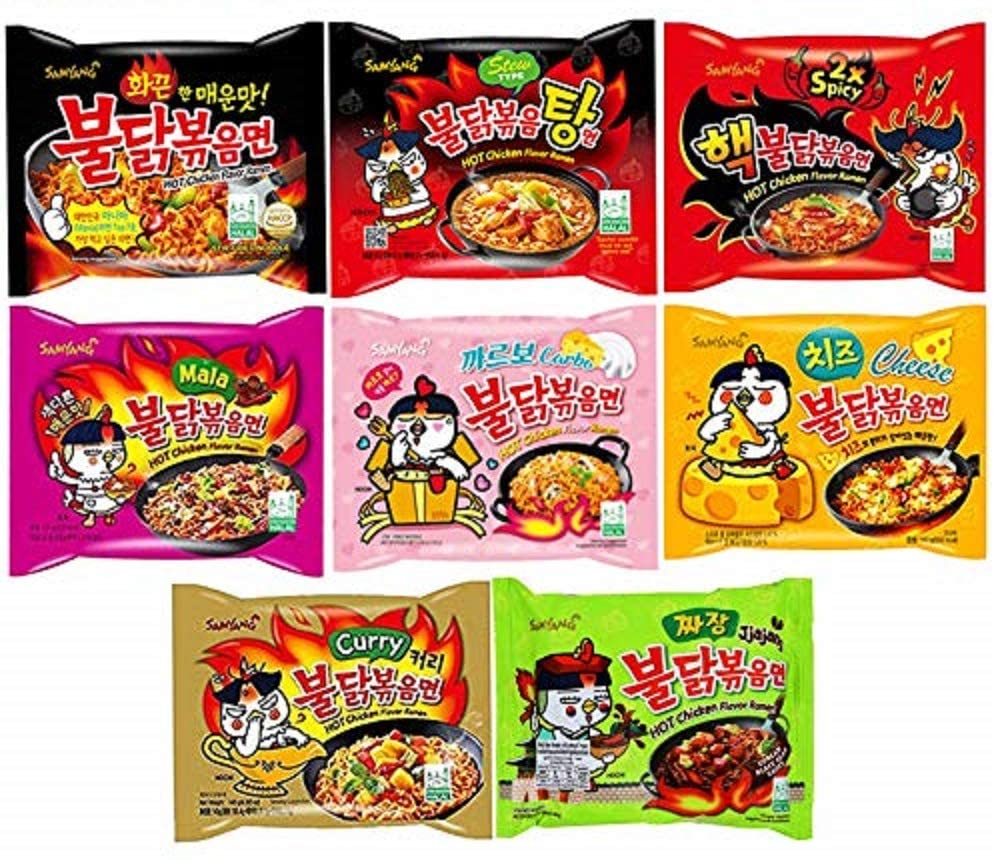 So the mixed pack comprises 10 allegedly selected at random. I ended up with 7 distinct flavours:

My Korean is at best -rusty- so I’m not entirely sure what the last 4 are; and it looks like I missed out on ‘curry’ flavour.

The ’light’ sounds, weird. I don’t plan to dissect the ingredients particularly - according to the back, the ’normal’ packs weigh in at around 550 calories with the light at around 390 calories.

It worked out at around £1.60 a packet which I have absolutely no doubt is completely over-the-top expensive. They’re £1 at Morrisons. Super Noodles are around £1.20 but my assumption is that these ramen - or something like them - are a staple in South Korea and considerably cheaper. Anyway.

The method is supposed to be boil the noodles for 5 minutes in water (with the ‘flakes’) and then stir-fry them with the sauce for 30 seconds. I figure this is over-complicating noodles + flavours + sauce; and besides, I need a way to make them in the office, with a microwave. So I’m going for boiling water + flakes + microwave; followed by noodles + sauce + microwave. This has the slightly unwanted effect of making them inedibly volcanic for at least the first 10 minutes after preparation, but hey-ho, it’s what we’ve got.

I’m not sure there exists a standardised-model for evaluating spicy chicken noodles. But I wouldn’t be surprised if there was such a thing. My main goal here is to find out whether the 2x spicy are crazy hot or not, that’s really about it. It seems reasonable to leave those until last but other than that, will probably just see what happens.

That should do for the setup.