I’ve been and gone. Whilst out there, I thought I would do a whole splendid topic post about it all, but actually, I can’t be bothered. I’ll post a few notes, but generally speaking, I had a wicked time, covering about 1000 miles in 5 days.

Southampton to Ireland, via the Stenaline Fishguard - Rosslare ferry on a 5 day return supersaver. Thanks to a discount in BiKE magazine, I got a spanking deal, and it cost me £60 return.

Working until 3am in the morning, and then aiming to leave for your holiday by 730am is not a great mixture. Away on the road by 830, I was yawning in my helmet, with only the two cups a coffee and a handful of ciggies I was able to ingest before leaving to keep me awake. Motorways really don’t turn me on, so I opted for the longer A36 route via Salisbury and Bath, up the M4 to the Severn bridge and up to Fishguard that way. The bike broke shortly after Bath (dodgy fuel pump) at which point I was all set to jack it in and give up. I tried the bike once more, and fortunately it fired, and I decided to risk it. Got to the ferry with about 2 minutes to spare and settled down to the 3.5 hours ahead of me. Riding on to the ferry is a lot of fun - you go up an intricate system of ramps and bridges and tunnels and such like, that make a satisfying clatter as you ride over the joints.

Off the ferry on the other side and straight on to the fast N25 down to Dungarvan, in hunt of the Bay View camping park. My first experience of Irish roads was fine; save for the fact that it was getting dark, I had forgotten my clear visor (only had the tinted Iridium visor), it was raining, I got lost in the smallest town I’d end up visiting and I was knackered from the 250 miles in the morning. Bay View camping park is a beautiful park, with, as its name suggests, a good view of “the bay”. I forget which bay it is, but it’s nice. The park was full, but the bloke in charge kindly let me pitch my tent anyway. Good facilities, though slightly overfilled with kid bearing families.

The plan of the trip was, well, to have no plan. I woke up each morning, looked at my mapbooks, and picked a point that was about a day’s riding away and that vaguely aimed for a campsite. Simple. I also tried to pick the interesting roads rather than the N roads, but this wasn’t always feasible. A quick note on Irish roads: they’re really good. Sort of. The actual roads are great fun and are unique in the fact that all the main roads are single carriageways (with the exception of a few stretches of dual carriageway), but they all have hard shoulders. Most Irish drivers are very considerate and if they see you coming will pull over and let you past. The speed limits are lower at 100km/h (about 62 mph) and most people stick to it. Ahem. However, the actual quality of the road surfaces is frighteningly shocking. Very few are actually tarmac as we’d expect; they’re more a kind of grey gravelly stuff stuck down a bit with some pritt stick. And they’re not level. Fun though. However, about 80% of all the roads I travelled on were, in places, being resurfaced. I’ve no idea how long it’s going to take, because of the 40-50 roadworks areas I went through, only 2 of them had any semblance of workers actually on the site doing anything constructive (and this was only a bloke in his van having a snooze).

The day had brightened up considerably from the rain the previous, and the day was good for my first proper day of touring. On the N25 you pass by some beautiful scenery, including a whopping great lake which’d be perfect for picnicking next to. But the Irish road makers, in their wisdom, don’t put any layby’s, parking spaces, even lookout points at all along its length. I suspect this might be to counter illegal fishing, but nonetheless it was a real shame. Killarney is a nice little town and out of Killarney I followed the road up to Tarbert where I took a short ferry to cross the Shannon. Shortly before though, I had a minor spill. Road signs in Ireland are good, in as much as they’re somewhat frugal with their placement. This is good because there’s less road debris to wrap yourself and potentially castrate yourself on should you come off. It’s bad because it means finding your way can be frustrating at times. I had one such incident where I went straight on at a roundabout when I should have been going right. I attempted a simple u-turn in the empty road, but a big patch of gravel on the other side of the road was my downfall as the front end went pinging away from me out of my control. Fortunately both myself and the bike were fine, and with the assistance of a helpful passerby, the bike was up and on the road again in no time. The second night’s camping was possibly the worst of all, given that the first caravan and camping park that I went to, didn’t accept tents, or bikers (even though this was not indicated in my mapbook). I plumped for Doonahan Caravan Park, just outside Kilkee which has a pisspoor camping ground. It’s nothing more than a shabby patch of grass on a slope, covered in gravel. It does have a stonking view out across the Shannon, though. I was camped next to two blokes from just outside Southampton, ironically enough, and we had a few beers and a bit of a laugh that evening.

The weather had picked up a lot by the Monday of my trip, and aside from the dangers of following a Mondeo towing an open backed trailer with an unsecured wheelbarrow in it, it was a great day. The road from Enistymon through to Lindvardoon is absolutely stonking. It starts innocuously enough, as a nice little coastal road (where you go through a small town which actually has surfable waves in its bay). You gradually start to climb, but you don’t feel aware of it. Travelling through Dartmoor-esque roads and surroundings, you all of a suddent find yourself at the top of big hill with just one road as the way down. And my God is it a great. Full of twisty bends, double backed hairpins and it carries on for mile after mile. It’s so good, that when I got to the bottom, I rode back up and did it again. There’s also a superb lookout point about halfway down with great views across the countryside.

(N.B. On my way back I met a couple of bikers on a 1200GS who said that the minor roads in the South portion of Ireland, which I missed out by going straight through on the N25 due to time reasons are all like that. So if you’re doing that, be sure to check out the roads that take you down to the coastline on your way to Killarney). After Lindisdoovarn, I headed for Lough Rea, and inadvertently managed to get done for speeding. A nice little Piggy he was, and tried to make out he’d done it for my own good, on account of the roads being “total shoite” (which compared to what I’d been on earlier, these were infinitely better), and I was only doing a moderate 80 odd in a 62 zone. Pah. 60 euros; but no points.

The Hodson Bay Caravan Park is a spectacular little park, run by a fella named Paddy. He looks like he’s been there all of his life (and probably has) and he must have been over 80. The grass was well kept, the site spacious and not a bunch of kids in sight.

It’s also on the shore of Lough Ree - a simply enormous lake, which makes most of the lakes in the Lake District look like mere puddles.

In the evening I wandered to the nearest bar, which happened to be the bar of a swanky but outrageously pretentious hotel, where there was a dress code of “respectable shirts and shoes at all times”, and there’s me in a vest top and flip-flops. Hmm. I think they loved me there.

The fact that was the last proper day of my trip had me a little glum under my lid. I was already quite tired from sleeping on the floor for the previous few nights, and with the weather being overcast at best, I didn’t seem capable of lifting myself. As a result, the miles somewhat drifted by and a few hours later, after another run-in with my dodgy fuel pump, I arrived in Kilmuckridge on the hunt for the caravan park. When I realised the place was a frightening mix of Butlins and Bognor, I promptly left, heading for Wexford.

This was a good choice - the campsite was slapbang on the coast, with some good views and beautiful clean air. Aside from the several gagillion annoying little kids, who ran about playing and screaming until past 10pm, it was all good. I ventured across the bridge in to Wexford proper, where I found an authentic Irish pub with authentic Irish men playing authentic Irish tunes on authentic Irish instruments. No idea what it was all about, but it was on the list of things to do. A couple pints of Guinness later and I was back at the campsite preparing myself for leaving early the following morning.

A short blast down the N25 to Rosslare, and I was at the ferry terminal about 2 hours too early. The crossing was uneventful, and given the requirement to get back for work in the evening, it was M4 all the way through Wales, to the Newbury turnoff, down the A34, the M3 and back into Southampton. Job done.

All round a great trip. If you’re planning something similar, here’s a few little pointers I picked up along the way.

Stuff I forgot to take with me:

Stuff I remembered to take with me:

I really recommend Ireland to bikers. It’s cheap and very accessible, the people are very friendly, and the roads are very ridable. The countryside is beautiful and very varied, and well worth visiting.

Unfortunately, I only have two photos from the trip… 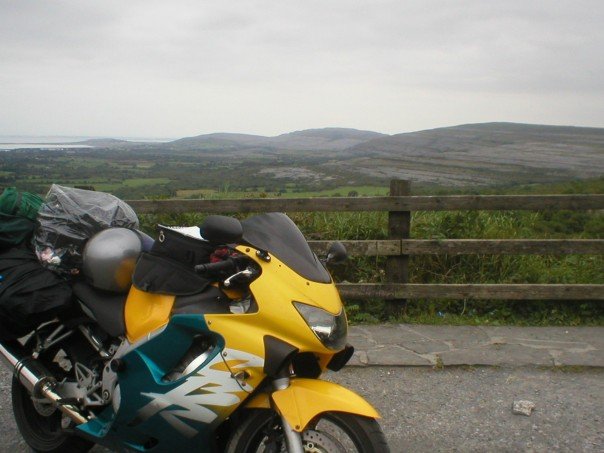 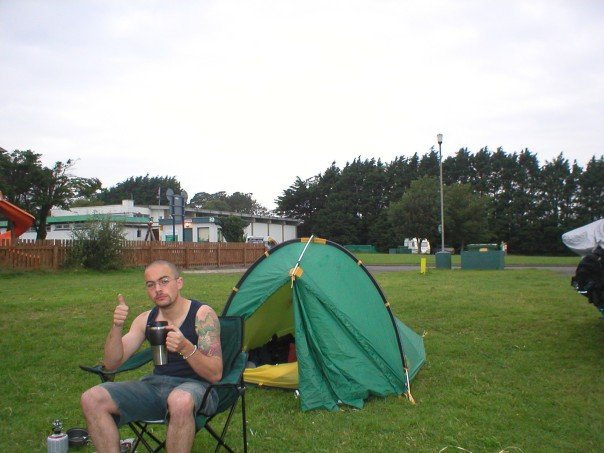