Moving my Music library to a NAS - update

Quick update on this as I’ve just migrated to a new Mac. For some reason I opted to do a sort of half-half job using the Mac migration assistant which, I may write about separately, because ultimately it’s been a bit of a mission to do this.

One issue was how to get Music set up on the new Mac. The music library on the NAS is fine and nicely organised but despite the media itself being somewhere else, the Mac still relies on a file called ‘Music Library’ (by default) which is effectively a big list of everything.

I suspect if I had migrated this (with the assistant) then it would have worked but what I thought I could do was just create a new library on the new Mac, repoint the library to the NAS location and it would just work. It didn’t.

I then tried to copy the old ‘Music Library’ file over the top of the new one, and this resulted in device issues - “You cannot change the music library at this time because the current library is in use by a device. Sign in without connected devices to change your music library.”

This I’m guessing is because my phone is sync’d with that library on the old Mac and it’s not happy trying to do this on the new one.

In the end, I opted for my original method.

In Music > Preferences > Files, update the Music Media folder location to be the one you want, then deselect Keep Music Media Folder organised AND Copy Files to Musci Media folder: 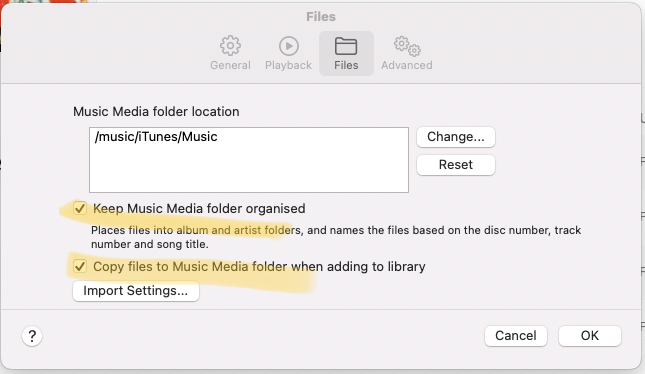 This will achieve nothing in the Music app, and even ‘Consolidate files’ won’t do anything. However, if you then browser to the media location, and drag that in to Music (or use the menu / commands to Import) then it will update; but it won’t actually move any of the media around (i.e., it will stay in place.)

Music will now be up to date. Be aware however that this will result in losing all of your metadata - extra things like when stuff was imported, any playlists and all the fave / like / play counts. If you to keep that stuff, then I suggest you migrate the Music Library properly (or by Export / Import.)

general nasmusicapplehomeitunes
« At last a macOS update I can get on board with | Can AI ever be sentient? On LaMDA and the wider debate »