We (my Father and I) ascended Ben Nevis via Tower Ridge on 10th May 2019. We had a pretty hairy experience. I’ve been meaning to write this up since - but things have been busy so it… slipped.

But news today that a climber died after being struck by lightning prompted me to do it because… well, read on.

Nevertheless, my sincere condolences go out to all those affected by the recent tragedy.

We had only a short trip. 5 days - 2 days travelling and 3 days’ climbing. We arrived in Fort William on schedule. We had planned to do Ben Nevis via Carn Dearg Arete on Day 1 as a sort of loosener - but that’s actually a pretty serious day - 8/9 hours - so instead we opted for a more relaxing meander up and down the valley to the CIC hut. This was still a good 6 hours and a decent way to stretch our legs. (Strava link if you’re interested.) 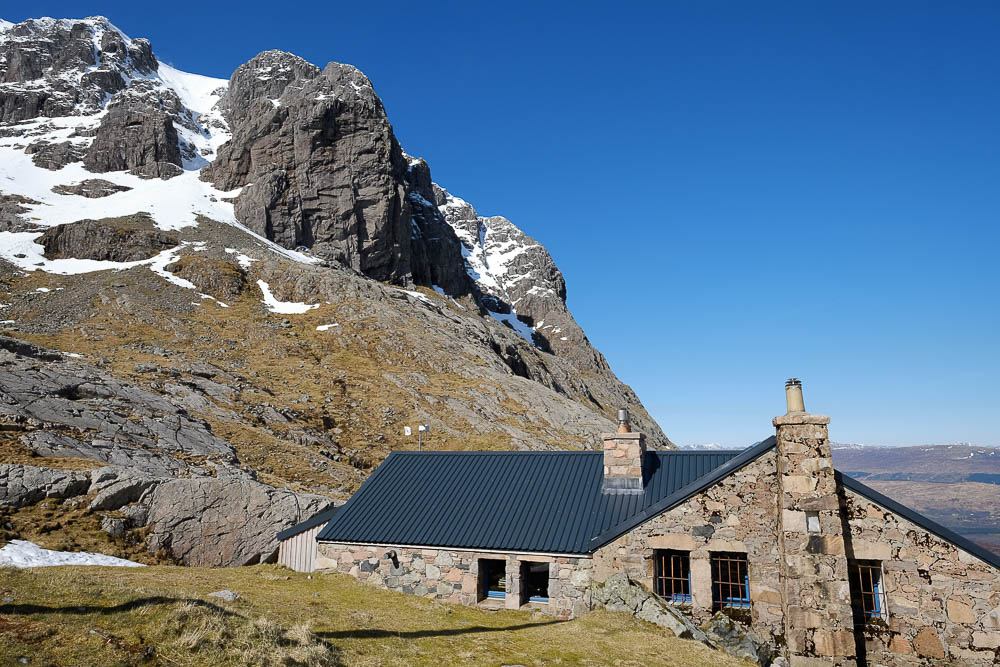 Day 2 was a pretty fun trip up Buchaille Etive Mor via Curved Ridge.

I’d recommend this day out to anyone if you’re in the area. The route itself is easy-going and the panoramics from the summit are spectacular. A really fun day out that can you see you up and back home inside 7 hours. (Strava link if you’re interested.)

So this is where it started to get really interesting and the main point of this post. We’d originally planned to go more towards the end of May 2019 to try and avoid the worst of the snow, but, for one reason or another we had to bring it forward. Nevertheless, we still hoped to get ‘non-Winter’ conditions on the ascent of Ben Nevis. That is, we expected there to be only minimal snow on top and the weather should otherwise be fairly straight-forward. Day 1 and Day 2 had actually been fantastic weather - day 1 was a little overcast but fine for a loosener and day 2 was great - warm, bright and sunny and on top of the Mor was spectacular. The forecast had indicated that Day 3 would be best of them all and so we approach the base of Tower Ridge with excitement. 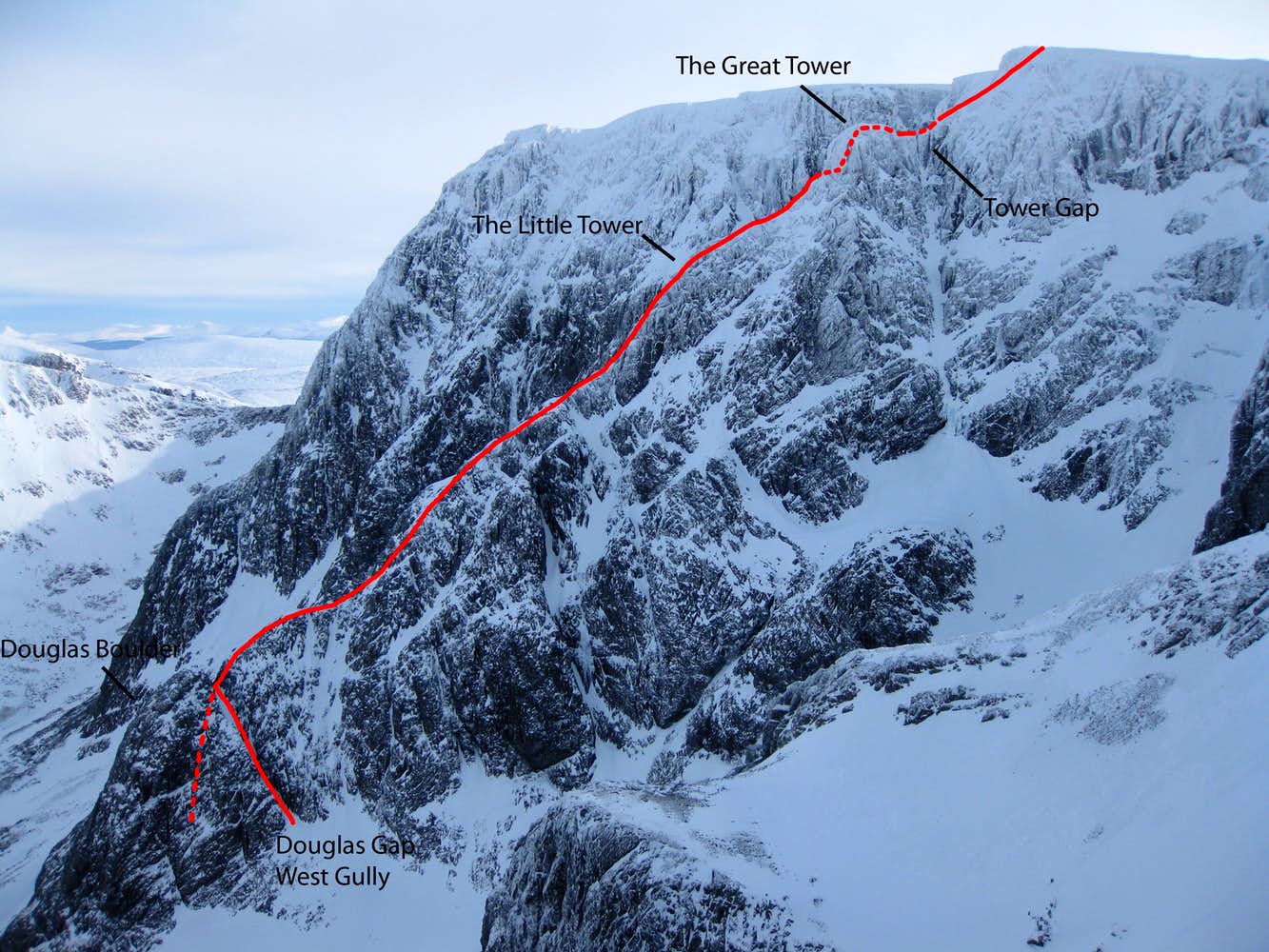 We made our way up the valley in a repeat of Day 1 to the CIC hut. It rained a little on the way but the sky and ridgeline was actually clearer than before so at this point we weren’t too concerned. But after a brief break, we carried on to the start of the ascent. It was clear that there was more resting snow than we had expected but not enough to be of great concern. But - the now persistent drizzle made everything wet - which proved to become an issue.

The ascent proper starts with the Observatory Gully which in good conditions would be pretty fun. But in the wet; it’s pretty sketchy. We roped up pretty early which slowed progress.

I’m not going to repeat the route - there are plenty of them out there - including this one:

The normal winter route avoids the face of the Douglas Boulder by entering the foot of Observatory Gully to the left and then cutting back right to climb the East Gully to Douglas Gap (I). An alternative start is via the Douglas Gap West Gully (I). From the gap an awkward 20m groove/chimney leads to the crest of the ridge, which rises gently and becomes quite narrow. It is possible to reach this section and avoid the moves out of the Douglas Gap by traversing in from higher up Observatory Gully over rocky steps and steep snowfields (II). From the narrow section most teams go out right on a gently rising steep snow ramp until overlooking the west flank above Vanishing Gully. Cut back up left onto the crest and follow it past The Great Chimney on the left to beneath the Little Tower. This usually requires three pitches of climbing, the first over a huge spike with a step right out of a groove above and the second on the left up a groove leading to a huge flat boulder. Above the flat top of the Little Tower an easier section leads to the foot of the Great Tower, an impossibly steep rock step. On the left side of the tower a very exposed and steeply banked snow ledge (The Eastern Traverse) is followed horizontally left, down slightly and round an edge to beneath a huge fallen-block chimney. Pass the block, steep walls and ledges to the top of the Great Tower with some difficulty. Follow the very narrow and exposed crest towards Tower Gap, descending slightly. Climb down into the gap (tricky and loose!) and either ascend the far wall or a slab on the left. The main difficulties are over once Tower Gap has been negotiated. Climb the final section of the ridge to the plateau, moving right beneath a steep wall at the top.

When the weather turns

We were approximately half way up when the weather really turned. The drizzle had turned to light snow which itself didn’t pose any particular problem. We had made a small plateau around the base of the Little Tower when things started to get particularly squiffy. Or, more specifically, the weather got pretty intense. We were now, moreorless, on Tower Ridge, in May, in winter conditions. And then the thunderstorm came.

It’s hard to describe the feeling of being approximately 1000m up, close to the clouds, when lightning comes. I have an incredibly vivid memory of the feeling of when the clouds ‘charged’. The strange thing is the other two in our party didn’t feel it. I can only describe the sound as similar to when an external flash on a proper camera recharges after use. But just a LOT more. It went down through my neck via my ear. The strike itself seemed close; but was most likely far away but not entirely sure as we all dived for cover.

And then then thunder rumbled. This was a bizarre experience as well - it was obviously cold at the altitude - but as the thunder rumbled through I felt a very clear ‘wave’ - like a sonic boom from video games - of warmth push down from the clouds towards us.

I felt the clouds recharge one more time. This time it was even more electrified - and again neither of the others felt it - but we didn’t get a strike this time. It was a surreal experience.

By now, we’d realised the objective now was to get off the mountain as quick as possible, very conscious of the fact we were carrying lightning magnets in the form of ice axes. Our options were back down the way we’d come - a good three hours, at least - or continue up and over and down the tourist route. As counter-intuitive as it sounds - to continue going up putting ourselves closer to storm - this was the choice we went for - we figured it would be far quicker to keep going up than climb down a now very wet and snow-covered set of gullies.

SO we did. Up Little Tower, via the tunnel-y chimney-y thing and then around the base of Great Tower. Conditions were OK for us to traverse the base of the Tower and then climb up in to Tower Gap - as opposed to go fully over the top and down in to the Gap. I’m not sure this is any easier because the climb up and in is pretty sketchy.

The Tower Ridge route is probably most noted for the Tower Gap - a literal gap of around 3m wide in the ridge - but with a near 300m fall on either side. By this time, the thunder storm had subsided and we were no longer so aware of that particular risk; in the face of now crossing the Gap.

It strangely didn’t pose much of a problem; even as the most exposed section of the whole route. Perhaps by this point we were just keen to get up and off; who knows. 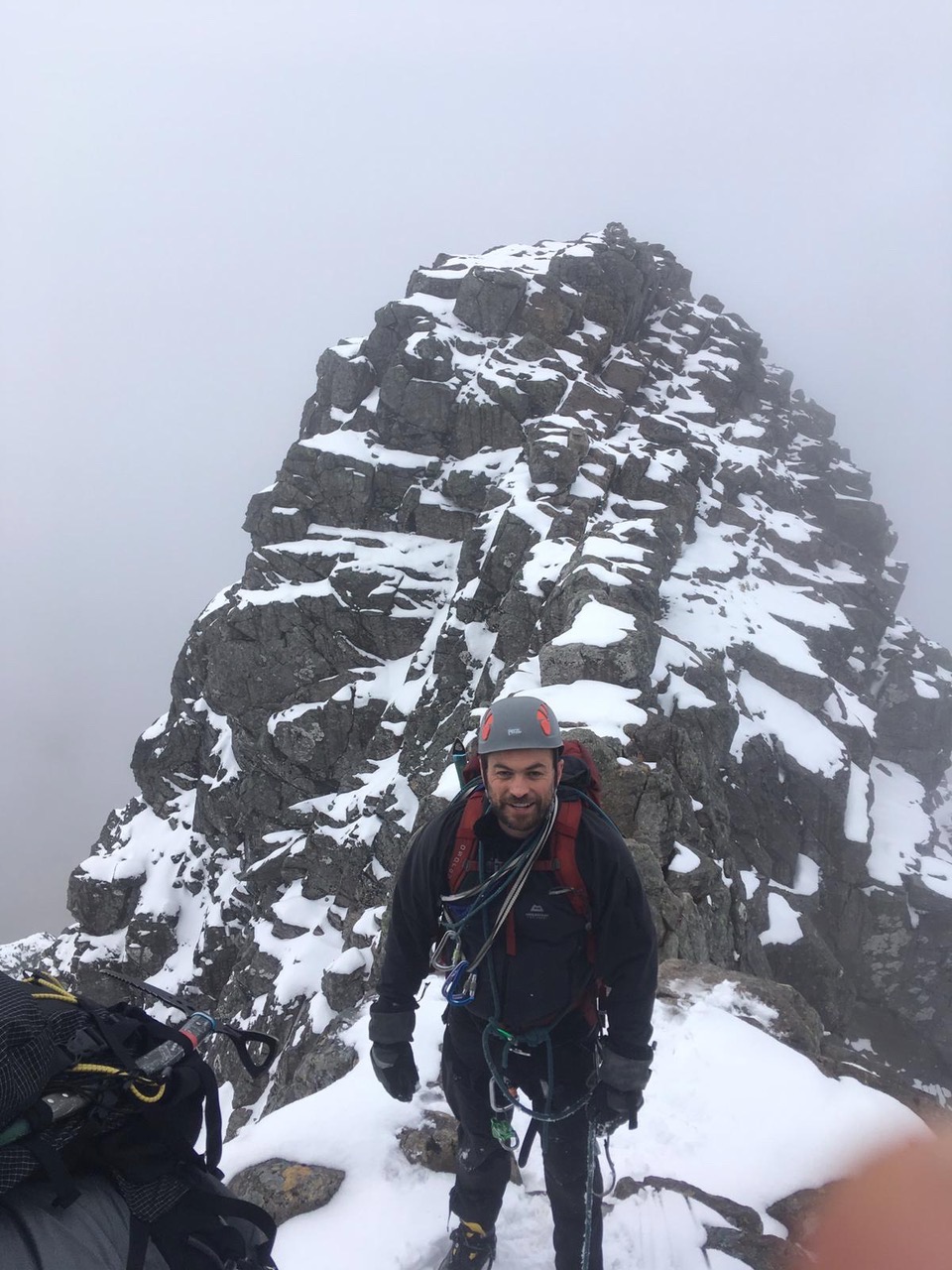 After Tower Gap the remainder of the route is simple - although you’re seriously in that risky zone of thinking you’re done and letting concentration lapse - you’ve got at least another 50m traverse with some scrambling / climbing and very real falls on either side.

But, as we reached the summit, relieved to have made it, cold, wet and tired but nevertheless more exuberant, the view was, quite spectacularly - rubbish. Ho hum - such is the way of mountaineering. 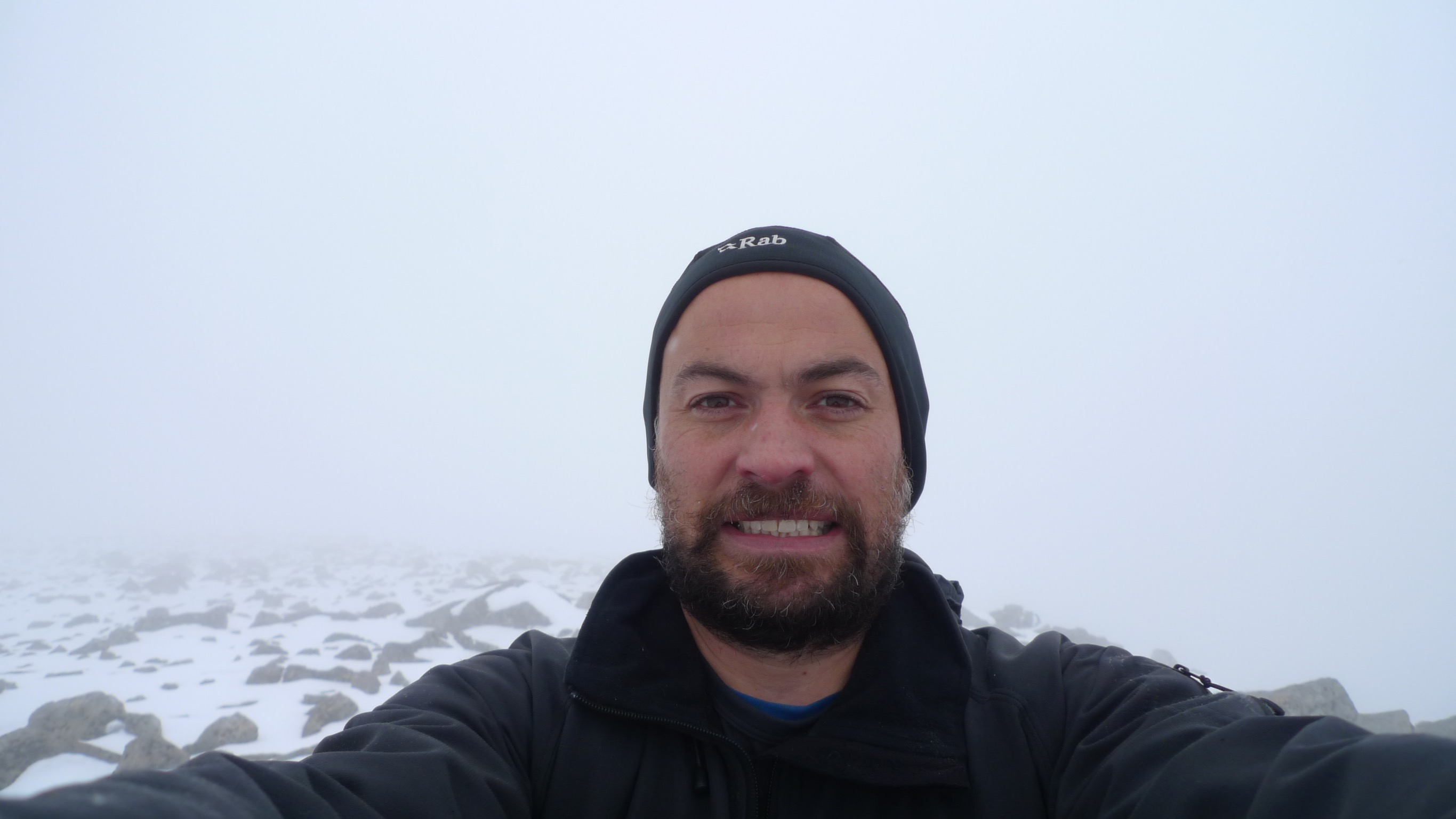 We made our way down the tourist route at about 1800 on a Friday - a full 9 hours after we started. (The most shocking thing were the hordes coming up in their shorts and jeans starting out on the Three Peaks for that weekend. But hey.)

We got caught in some weather that whilst not forecast was not entirely unexpected. Where we were we actually had little in the way of control over the situation. At that point, if things were going to go bad; they would.

We were fortunate on this occasion as we got out unscathed.

I suppose the point is that any sort of day in the mountains can be unpredictable. We were tooled up - we had crampons and ice axes (and ropes and all other ssorted gubbins) as well as waterproofs, warm gear and decent supplies - so we were prepared and able to get through a day that was supposed to be around 7.5 hours which ended up being more like 11 hours.

I daren’t think what it would have been like without all the proper gear.