5am start. 40 other people all doing the same. Force yourself out of a warmish bed to a very cold Alpine hut. Bag was packed the evening before so it’s just extra clothes on then downstairs for breakfast. Cereal and milk, bread and jam and some hot but tasteless black water, or coffee, as they were calling it. Sense of trepidation about what lay ahead. On paper it was a 1,300m ascent to 4,020m, but this was via rock ridge and a narrow snow ridge. Surely it couldn’t be too bad?

Some teams already setting off as trying to pull boots on. Fill water bottle with ice cold water from stream outside. Head torch on. Pitch black. Set off. On wrong trail. Cross back to correct trail and hope no-one noticed. Dark is our friend in this matter. Hard going so early on. -5C.. cold. Hard breathing. Head torches light up the valley as we slowly ascend. Seems people are already at the top of the valley and starting on the ridge. We’ve got an hour to go.

Get to the top of the valley. Not too bad. Dad is slow but getting there. 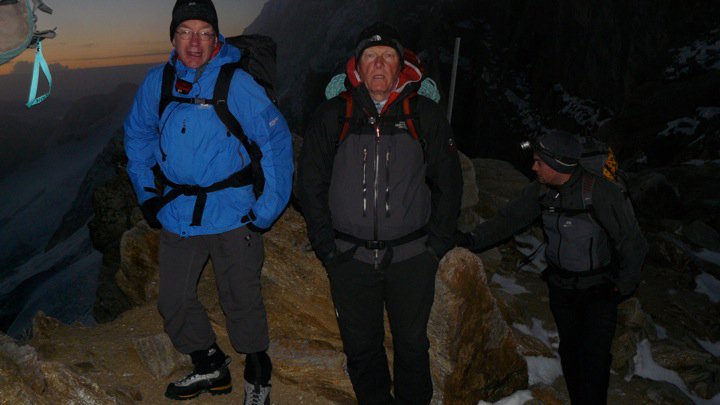 Quick break before moving on. Sun starting to come up. Still cold as hell but the progress keeps you warm. With the early sunshine, look back at what we climbed the day before. Looks big. Small compared to today. 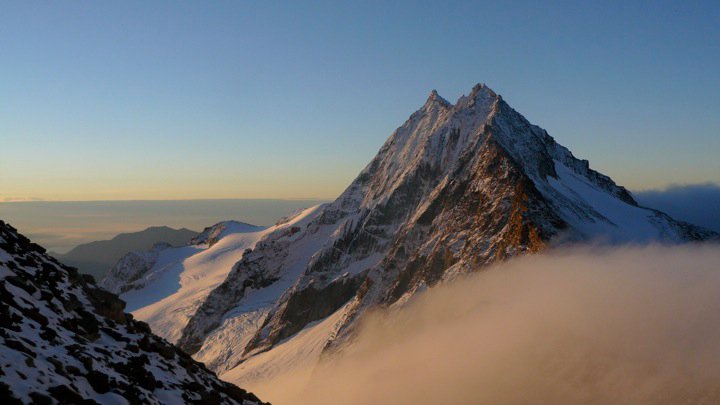 Easy going on nice soft snow. Way ahead is just rock. Or steep snow. Our choice. Worry about that later. Hour later we’re at the top of the first rock ridge with a choice. Cut right and hit a 300m ascent of snow. Easy going but very slow. Or hit the rock. Our guide decides rock. Harder and scarier, but in theory quicker moving. Not convinced. Harness on. Ropes on. Helmet on. Quick drink. Look down. Already very high up. Start on the the rock ridge. About 3100m. Not too bad. Ridge is 20m across. Loose rock. Snow is still solid. Won’t be fun when it melts. 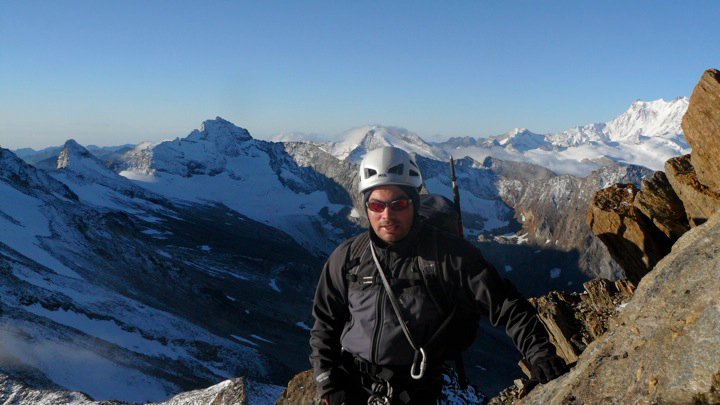 Keep going. How far? Another 900m. Great. Brian and I climbing in 30m sections. He goes. Makes safe. I go. Make safe. He goes. Repetition makes it easier. Not too bad in short steps. Looks OK when looking up - just don’t look left or right. Conditions are brilliant. Sun out, not much wind. Amazing views. 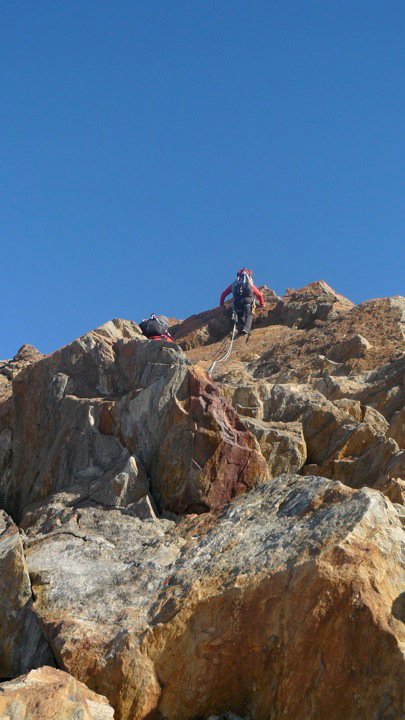 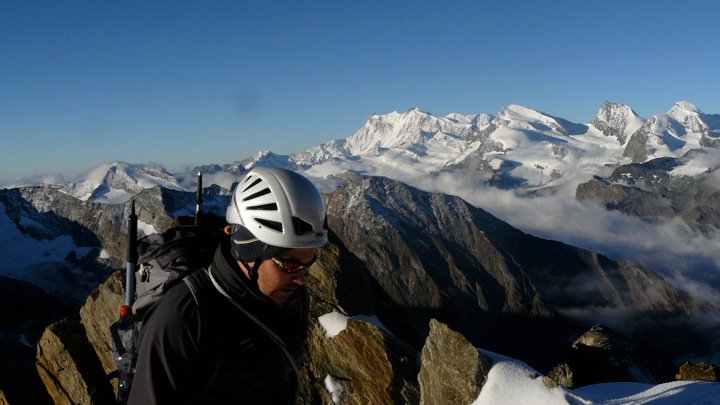 How long have we been going? Will this rock never end? This fucking rope is doing my head in. Look over at the snow field alternative. Groups trudging up it? Having fun? Not sure. Can’t be worse than this. So steep. Keep going. Most sections are straight-forward. Quick bursts followed by breaks. Hold-ups ahead are welcome - time to breathe. Getting high now. Keep going. Rope is always in the way. Do we need it? Adds some safety. Snow melting, getting slippery. Get told - 150m to go to the end of the rock and hit the snow line. Turns out to be just 50m - fantastic. No more rock. Just a very exposed snow ridge! 3,900m now. Just 120 ish to the summit. Wait. 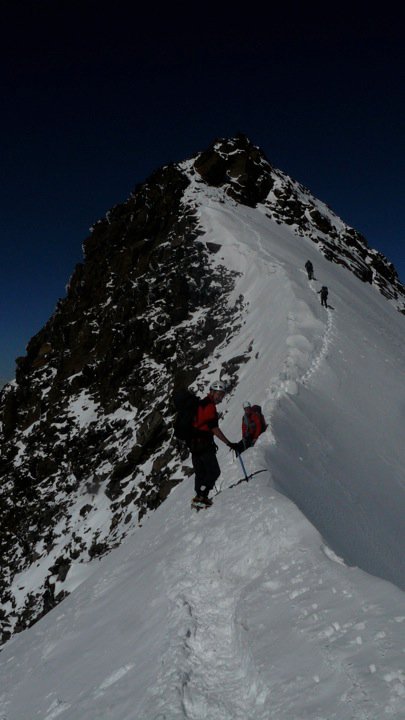 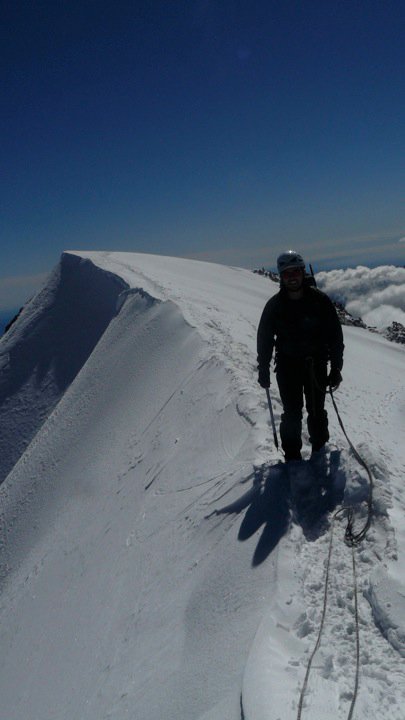 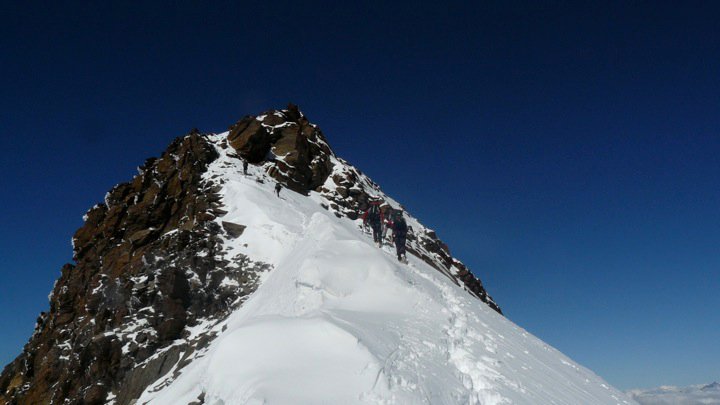 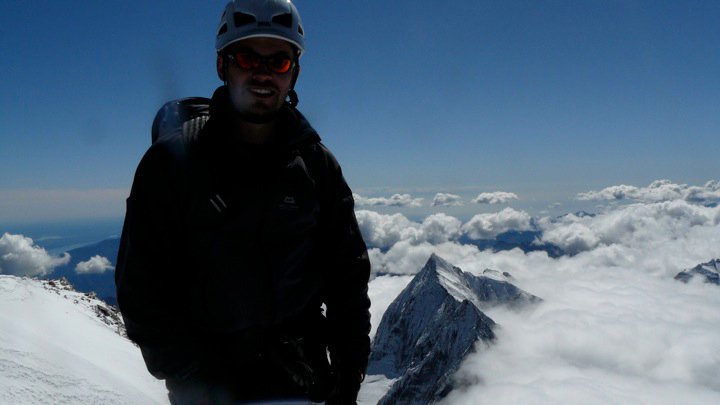 Wow. First 4kM peak. Congrats. Hand shakes. Look around. Unbelievable views. Did I enjoy this? Not sure. Job done! NO! Still have to go down. Fuck. Look at this. Seracs and crevasses everywhere. Is that the biggest glacier ever? 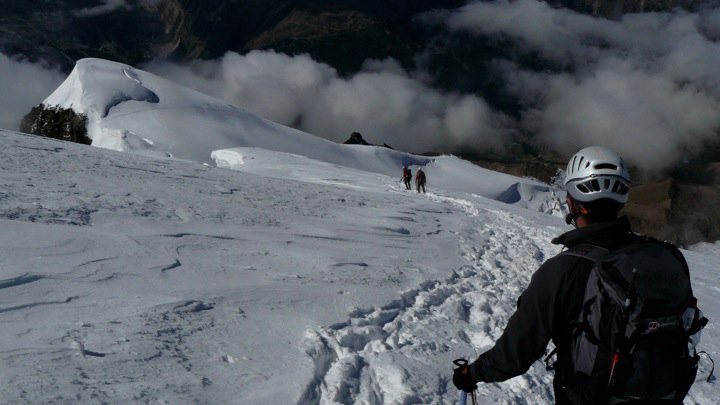 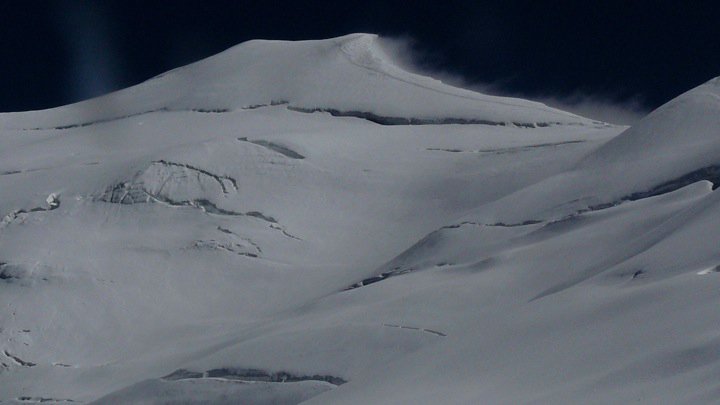 Start down. Go steady. Crampons are digging nicely. Feeling happy to have made the summit. Still a lot to do before home safe. Mike and Dad up ahead. I’m leading Brian. Damn, but crevasses. Path goes very close to the edge! WHY? Because big hidden seracs to the other side. Surely overhangs. How is this safe? No idea. Don’t want to know. Don’t ask. Keep going. Wind down. Look back at what we just climbed. Wind rolling in… looks amazing. Wind down and around. Direct route would be through a minefield of crevasses. Happy to go slow. Get passed by IML and two victims being herded up and lightning speed. They’ll pay £500 for a 2 hour trip up to the top and back. No doubt they’ll pass us coming down. Worth it?

Get further. Get passed by IML and his sheep. OK. ‘Surf’ down thick snow field - fun. Climb down main top of glacier. BIG crevasse. Ladder over it. WTF? Apparently I’m going first. Easy. No worries. Down and up, then.. WHAT THE ACTUAL FUCK? 30cm wide ridge with nothing on either side… drops away to crevasses… 300m deep. I’m first. OK. Just go for it. Can’t run in crampons. Just go for it. Get to the other side. Still have 3 other people to get across. Come on - I’ve done it - you can too. Go steady. Brian across. Dad across. Mike across. OK. Made it. 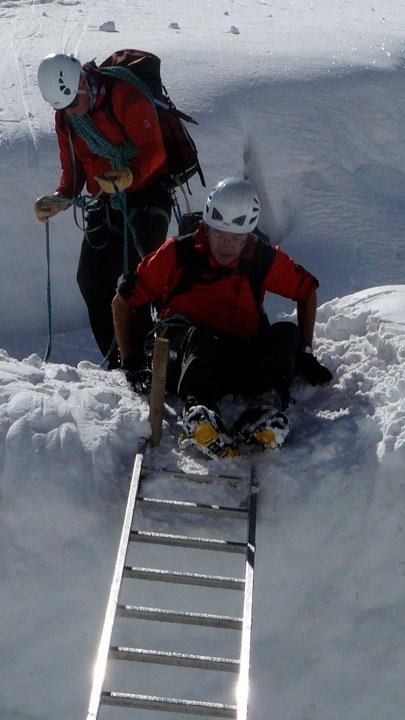 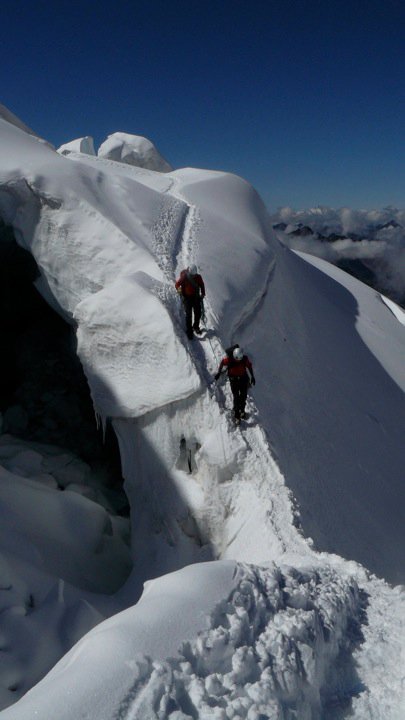 Worst over now… surely? No. Still crossing a glacier. Concentration. Crazy hot now in full midday sun. Can see the ‘bottom’. Keep going. Starting to level off. Getting easier. Confidence up. We’re getting there. We’re done. I wish. Keep going. Finally get to bottom of glacier. Ascent and descent of about 3000m has taken 10 hours. Still got to get to hut. Crampons off. Strip gear off. No water left. Trudge off valley, find next valley with hut. 2 hours to get down. Fucked. 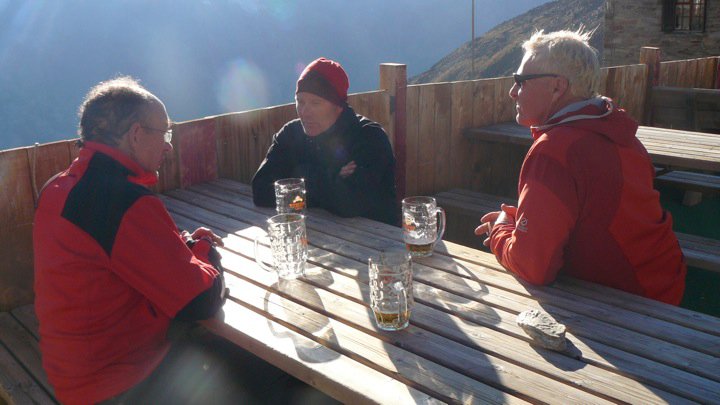