After our fairly epic 12 hour ascent of the Weismies, we took a rest day. Not surprising really - all four of us were in varying stages of pieces. It meant we had to abandon an ascent of the Lagginhorn - that looked like a full on day. In reality, I felt I might have made it up, but must admit I wasn’t too upset to find myself on a cable car going down the valley from the Weismies Hut. We were back in Saas Almagell by mid morning.

The following day we made our way up to the Britannia Hut via the Felskinn lifts. Dad was still in a bad way and ultimately decided he couldn’t manage it, which was a huge shame. Although, he dodged a bullet because the traverse from the lift to the hut, which was described as nothing more than than 30m odd ascent on a path across, is actually a godawful arrangement of scree and erratics and was the most hideous part of the whole trip. Thank God there was no snow! The potential for slipping off a rock and doing yourself some serious damage was immeasurable. We got to the hut, did a quick recce about and settled in for the night - ready for a 3am start the next day to ascend the Allalinhorn up the tricky route. 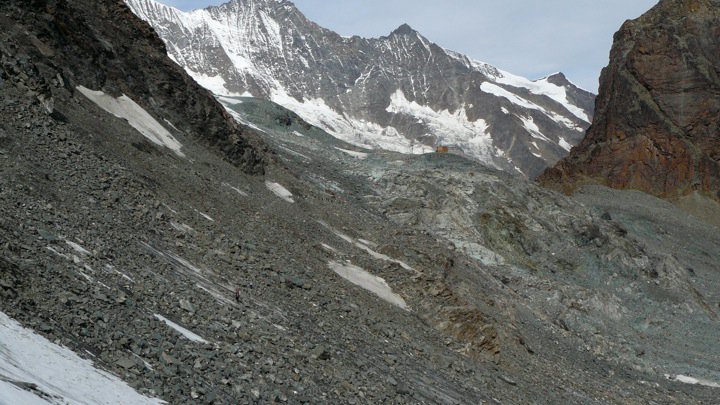 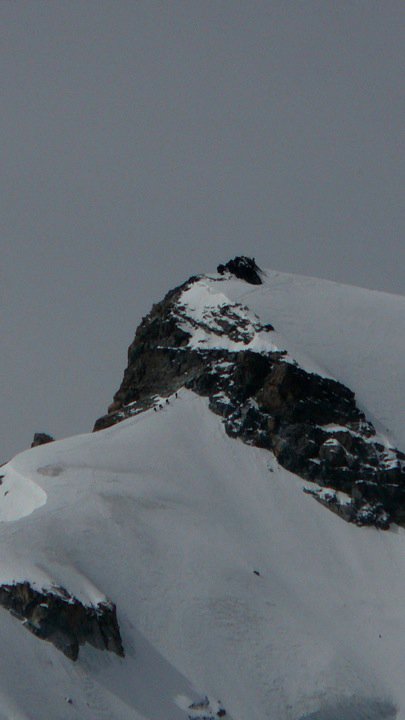 The route itself is an ascent of a huge glacier, and then a snow ridge and the summit. The only tricky bit, we were told, was a 30m ‘rock step’ at the top which would scare the shit out of most people. Well, after the Weismies, I figured anything was possible, and wasn’t too perturbed by this news.

But then the weather set in. By 7pm it was grey. By 9pm it was dark and overcast and the beginnings of snow. By 3am when we got up to inspect, we knew immediately that we weren’t going anywhere. Snow had fallen solidly throughout the night and it made the difficult ridge far too dangerous. 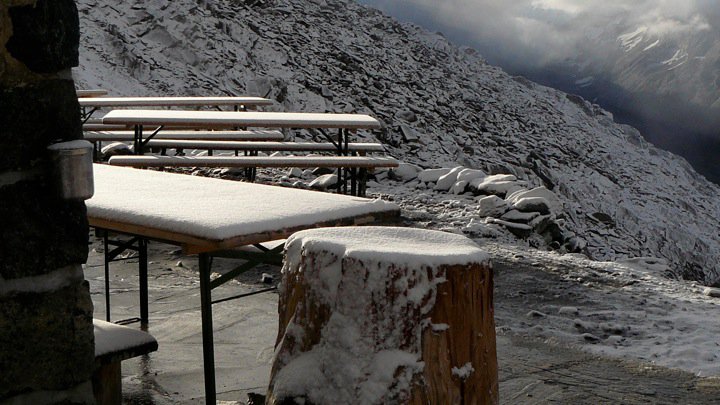 After some discussion we figured the best bet was to go back to the lift, get a different lift even further up, and go up the Allalinhorn via the route normale. So that meant crossing that fucking scree slope… now in snow. Great. 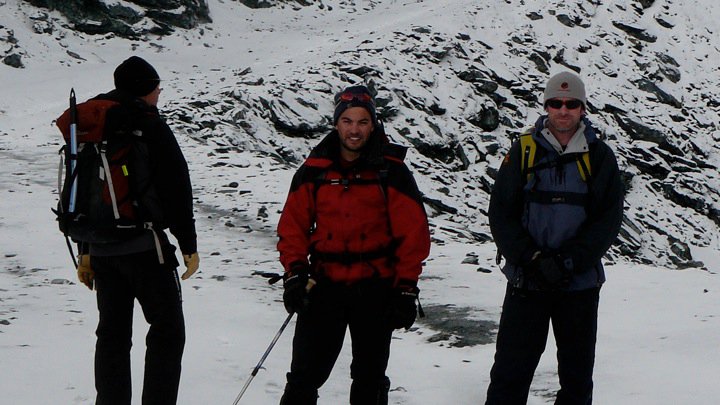 Yet another testament to Swiss engineering. The lift up to the foot of the range is… underground. Yes, it literally goes through a mountain. Albeit very expensive, but nonetheless impressive. Out of the lift, straight on to snow and ready to go up. 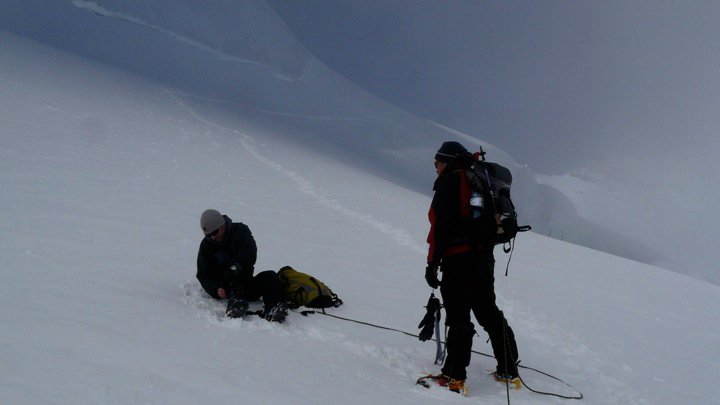 Half way up and you meet a snow ridge with a impressive view of the Zermatt region - engulfed by the Matterhorn. 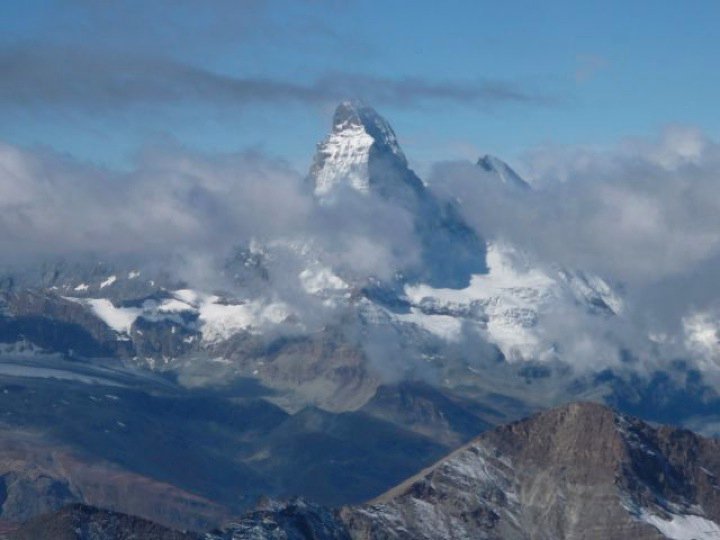 The route normale up the Allalinhorn is nothing more than a trudge up, and you just keep going. It’s not technical at all and other than a ridge and some sizeable seracs, it’s fairly easy going. Compared to the ascent and traverse of the Weismies, this was a veritable conveyor belt. We were up and down within 3 hours. In fact, you could do from the valley bottom to top - i.e., 1800m to 4000m and back in an afternoon with some ease - thanks to the lift systems. Perhaps not your stereotypical alpinism, but very accessible. 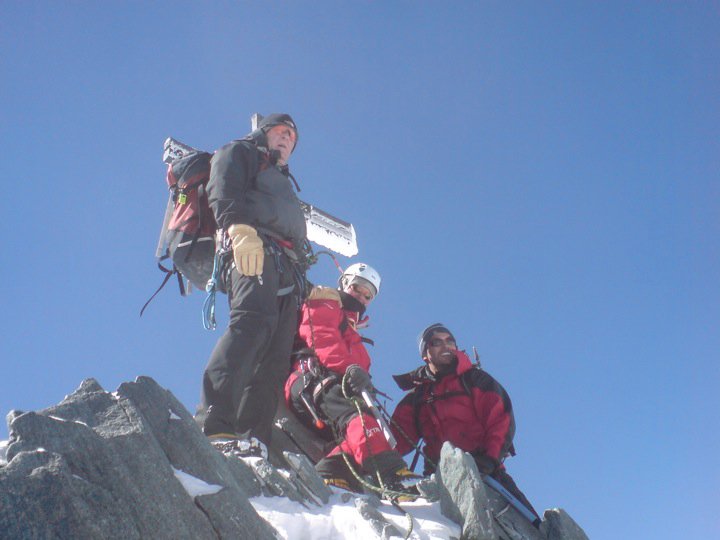 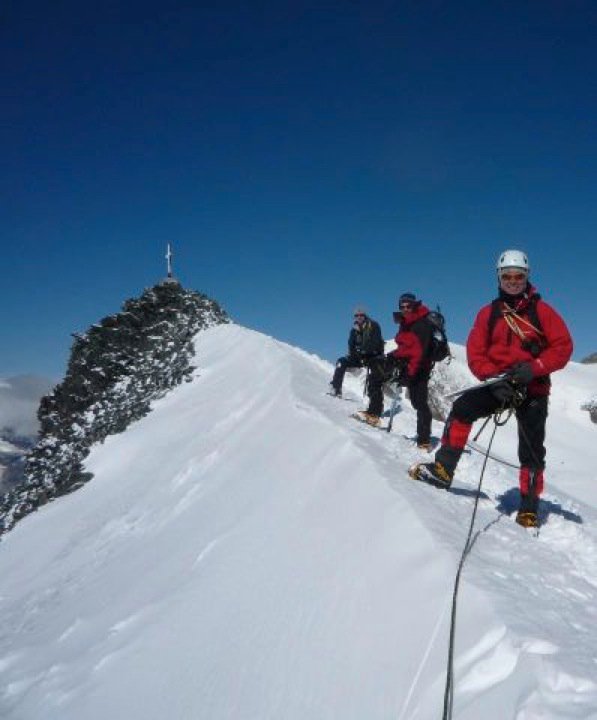 So that was two 4,000m peaks with a few other smaller things thrown in for good measure. All in all a very enjoyable time… and certainly a nice intro in to alpine stuff for the future.